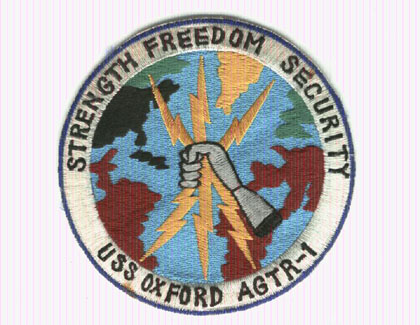 
The second Oxford (AGTR-1), a Liberty ship, was laid down 23 June 1945 under Maritime Commission contract by the New England Shipbuilding Corp., Portland, Me.; launched 31 July as Samuel R. Aitken (MCE-3127); sponsored by Mrs. Margaret C. Aitken; and delivered to the Maritime Commission 25 August.

As Samuel R. Aitken she served the merchant fleet, first with the Moore-McCormack Steam Ship Lines and then with the Arnold Bernstein Line. She was laid up 10 April 1948 in the National Defense Reserve Fleet, Wilmington, N.C.

Oxford was designed to conduct research in the reception of electromagnetic propagations. Equipped with the latest antenna systems and measuring devices, she is a highly sophisticated and mobile station which can steam to various parts of the world to participate in the Navy's comprehensive program of research and development projects in communications. Because of the immediate or potential military applications of her work, much of Oxford's employment is classified.

One of Oxford's publicized operations took place 15 December 1961 when she became the first ship to receive a message from a shore based facility via the moon successfully. Next she departed Norfolk 4 January 1962 for a South Atlantic deployment, returning four months later. Another four month South Atlantic deployment followed in May 1963, after which Oxford underwent overhaul at Norfolk Naval Shipyard, Portsmouth, Va.

Oxford was redesignated Technical Research Ship (AGTR-1) on 1 April 1964. She departed 4 August on yet another South Atlantic cruise, conducting research not only in electromagnetic reception, but also in oceanography and related areas. She returned to Norfolk 1 December.

Oxford steamed for Africa 3 February 1965, calling at Las Palmas, Canary Islands, Lagos, Nigeria, and Durban, South Africa. A message arrived 26 May reassigning the ship to the Pacific Fleet, with a new homeport at San Diego, Calif. She stood out of Subic Bay, P.I. 16 June for a one month deployment to the South China Sea, and thus set the pattern for her operations into 1969.

Oxford decommissioned and was struck from the Naval Vessel Register 19 December 1969 at Yokosuka, Japan.


Add Your Name to the
AGTR-1 Crew Roster