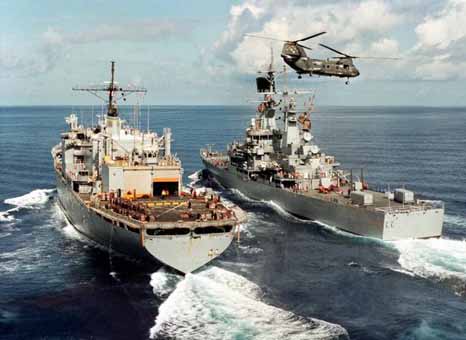 The USS MARS (AFS-1), a Mars class combat stores ship, was commissioned on 1 DEC 1963. USS MARS was the first of her class was built at National Steel and Shipbuilding in San Diego, CA, and then homeported n San Diego after commissioning. Her career consisted of numerous Western Pacific deployments in support of the fleet from first, San Diego, then Alameda, CA, and while forward deployed to Sasebo, Japan. MARS ranged from the West Coast of the Untied States to the Gulf of Aden, with significant time "in theater" off of Vietnam. USS MARS served her country for 30 years, 2 months and 16 days, until decommissioned on 1 February 1993. MARS continued to deliver the goods with the Military Sealift Command (MSC) as USNS Mars (T-AFS-1) until her inactivation on 19 February 1998. The hulk of the MARS was disposed of during a multi-national fleet SINKEX in July 2006 off of Hawaii.

Named for: The borough of Mars in Butler County

Mars was the first of a new class that may eventually replace three types of supply ships: the AF, AKS, and AVS. Two innovations were Boeing UH‑46 helicopters and an automatic highline shuttle transfer system to make a rapid transfer of supplies possible. To speed replenishment processing, Mars became the first ship in the Pacific Fleet to be equipped with a 1004 Univac computer system.

Assigned to Service Squadron 1, Mars left San Diego 16 March 1964 for Acapulco, Mexico, for shakedown, returning to San Diego Faster Sunday. On 1 September she departed for the western Pacific, arriving Yokosuka, Japan, the 23d. With Yokosuka as home port, the combat storeship operated from the Philippines to the South China Sea through the rest of the year.

Mars continued through the next 3 years to provide logistic support to the far ranging 7th Fleet at sea, especially off Vietnam, while revisiting the South Pacific ports of Hong Kong; Sasebo, Japan; and Subic Bay, Philippines. Typical of the combat storeship's supply activities was a night vertical replenishment of Canberra while the heavy cruiser was fighting off Vietnam, her 8 inch guns on the engaged side blasting away in support of troops ashore. Mars has taken an especially active part in similar operations helping block Chinese communist inspired Vietcong aggression in South Vietnam. She set several replenishment records in 1967 and 1968, and into 1969 continues to play an important role in the fleet operations in the Southeast Asia area.


Add Your Name to the
AFS-1 Crew Roster