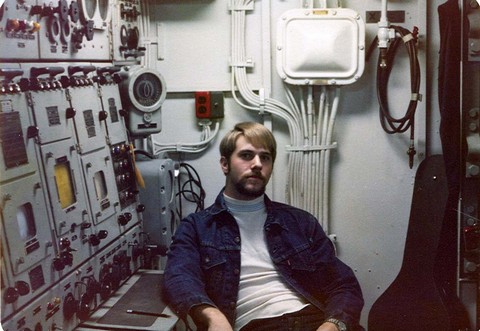 
The third Santa Barbara was laid down on 30 December 1966 by the Bethlehem Steel Corp., Sparrows Point, Md.; launched on 23 January 1968; sponsored by Mrs. Graeme C. Bannerman, wife of Assistant Secretary of the Navy for Installations and Logistics; and commissioned on 11 July 1970, Capt. Charles A. Whit-more in command.

Following fitting out at the Norfolk Naval Shipyard, Santa Barbara arrived at her designated home port, Davisville, R.I., on 18 September 1970. On 6 October, the ammunition ship conducted her first underway replenishment.

After a short period in Davisville, Santa Barbara got underway on 1 February for her first regularly scheduled fleet exercises. With units of Task Force 27 participating in Operation "Springboard," the ammunition ship operated out of Roosevelt Roads, Puerto Rico, until 25 February, rearming 17 ships and successfully transferring over 400 tons of missiles, bombs, and projectiles. On 15 March, Santa Barbara began a two-month availability at the Boston Naval Shipyard. Departing on 25 June, she arrived the next day at Davisville.

In July, she sailed to Guantanamo Bay, Cuba, for refresher training; then, returned to Davisville in August. In September, Santa Barbara was deployed to the Mediterranean, returning to the United States on 17 March 1972. She departed the New England coast in April, bound for a short cruise in the Caribbean. Returning to Rhode Island in late May, she departed again on 5 June; this time ordered to the western Pacific on an extended deployment. After seven months in Asian waters, Santa Barbara entered Pearl Harbor on 5 February 1973; then, proceeded on to Quonset Point, R.I., via the Panama Canal, arriving on the 22nd. She operated along the east coast and in the Caribbean for the remainder of 1973 and for three months into 1974. In April 1974, Santa Barbara embarked upon another Mediterranean cruise. As of June 1974, she is still operating with the 6th Fleet.


Add Your Name to the
AE-28 Crew Roster