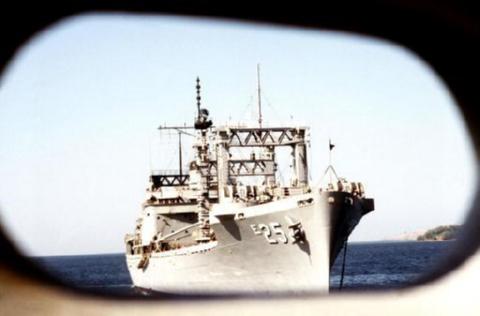 The USS HALEAKALA (AE-25), a Nitro-class ammunition ship, was commissioned on 3 NOV 1959. USS HALEAKALA served her country for 34 years, 1 month and 7 days, until decommissioned on 10 DEC 1993. Built by the Bethlehem Steel Shipbuilding Company in Baltimore, Maryland, USS HALEAKALA traveled to Guantanamo Bay, Cuba for REFTRA after commissioning. In March 1960 she transited the Panama Canal and on to her homeport of San Fransisco, CA. In July 1960 HALEAKALA departed on the first of many Western Pacific deployments. HALEAKALA voyaged to the Coast of Vietnam annually from 1965 to 1972. Decommissioned in December 1993, USS HALEAKALA was subsequently transferred to the National Defense Reserve Fleet.

After shakedown out of Guantanamo Bay Haleakala transited the Panama Canal and visited Chile and Costa Rica before arriving San Francisco 17 March 1960. The fifth of a new class of ammunition ships designed from the hull up for carrying and transferring at sea the latest in munitions and guided missiles Haleakala spent the first part of April with Vega conducting replenishment exercises to test new equipment.

Haleakala departed on her second deployment to the Western Pacific 18 April 1961 and again serviced units of the 7th Fleet returning to Port Chicago 8 September. In October in company with Mount Katmai she steamed to Long Beach to participate in Exercise "Covered Wagon" an effort to test realistically a representative Attack Carrier Strike Force in all of its wartime tasks in the face of opposition similar to that which might be expected of a potential enemy.

Haleakala made two subsequent deployments to the Western Pacific between 29 May 1962 and February 1964. She arrived Todd Shipyard Inc. Seattle 28 February 1964 for overhaul and modernization to increase her efficiency and safety. With conversion completed by May 1965 through the fall of 1965 Haleakala participated in Operation "Baseline." On 20 November she sailed for Yankee Station via Pearl Harbor to support combat operations in Vietnam returning to Subic Bay 31 December.

Most of 1966 was spent on another WestPac deployment. Haleakala departed Subic Bay 23 August for the West Coast arriving San Francisco 12 September. After training exercises off Mare Island through December Haleakala returned for further replenishment operations off Vietnam into 1967.


Add Your Name to the
AE-25 Crew Roster