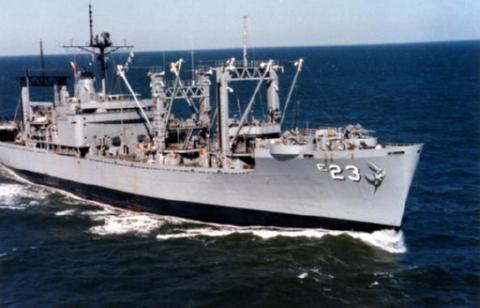 After shakedown in the Caribbean, Nitro was welcomed at her homeport, Davisville, R.I. After lengthy 2nd Fleet exercises she joined the 6th Fleet in the Mediterranean in February 1960, returning in September. She was back in the Mediterranean in the summer of 1961, returning to Norfolk 3 March 1962. During April and May she supported 2d Fleet exercises in the Caribbean. On 6 September she steamed for an operational and good will visit to Northern Europe, returning to Earle, N.J., 15 October. During the period from 11 to 24 November, Nitro sailed to the Caribbean in support of the Task Force engaged in the quarantine of Cuba. She returned to Davisville 24 November.

On 6 February 1963 Nitro departed for 6th Fleet operations, returning to Davisville 24 September. After overhaul at Brooklyn, she operated in the Caribbean and off the east coast until 17 July 1964 when she again deployed to the Mediterranean, returning 5 February 1965. She spent the rest of the year in Davisville and operating in the Caribbean until 16 November when she again steamed east for Gibraltar. She returned from the Mediterranean 22 March 1966.

On 18 May her status was changed to in commission in reserve for conversion at Maryland Shipbuilding and Drydock Co., Baltimore where she remained until recommissioned special 31 August 1967. She got underway 16 October to operate off the east coast and at year's end was back at Davisville. She continues her alternating service with the 2nd and 6th Fleets into 1970.


Add Your Name to the
AE-23 Crew Roster