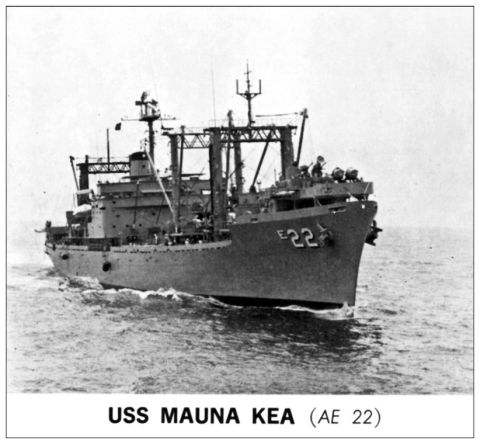 The USS MAUNA KEA (AE-22), a Suribachi-class ammunition ship, was commissioned on 30 MAR 1957. After fit out and shake down training MAUNA KEA served with the Pacific Fleet for her entire career. Always true to her motto, "We Sail to Serve", she deployed to the Western Pacific numerous times to keep fully armed. At the end of her service career MAUNA KEA was the oldest ship in commission in the US Navy and flew the "Navy Jack". USS MAUNA KEA served her country for 38 years and 3 months, until decommissioned on 30 JUN 1995. First laid up at the the NISMF at Suisun Bay, CA, the hulk of the MAUNA KEA was disposed of during a Sinkex in July 2006 off of Hawaii.

Following shakedown, Mauna Kea, designed for rapid replenishment of ammunition at sea, reported for duty with ServRon 1 in the eastern Pacific. Into the fall of 1957 she serviced the 1st Fleet and in November made preparations for her first WestPac deployment. Sailing west, she reported to SevRon 3 at Sasebo, Japan, in December and commenced distributing the bullets of beans, bullets, and black oil to the ships of the 7th Fleet. From that time until 1965, she rotated between duties with the above‑noted service squadrons, participating while with the 7th Fleet, in SEATO exercises and in joint exercises with Koreans, Japanese, and Chinese Nationalist Forces.

On 28 February 1965, the ammunition ship arrived at the Lockheed Shipbuilding & Construction Co. yards, Seattle, Wash. There having reverted to in commission in Reserve status, Mauna Kea commenced FAST (Fast Automatic Shuttle Transfer System) conversion. Completion of this conversion, which would enable her to transfer a bird from her hold to the magazine of a missile‑firing ship in 90 seconds and allow her greater versatility in servicing the fleet with the addition of a heliopad for vertical repenishment capabilities, was delayed for 8 months, because of strikes and lack of necessary parts, until June 1966. Then followed a fitting out period and intensive postconversion shakedown exercises, which continued into the fall. By November she was again an active unit of the Pacific Fleet's Service Force and on 28 December she departed her home port of Concord, Calif., for her ninth WestPac deployment.

Traveling westward, Mauna Kea arrived at Subic Bay, Philippine Islands, 9 January 1967 to join ServRon 7. Four days later she departed Subic Bay for her first trip to the line off Vietnam. For the next six months she rearmed carrier groups on Yankee Station and cruisers and destroyers in the Corps' areas off South Vietnam. At the end of July, she headed north to Japan for a brief visit at Yokosuka before getting underway for California. Arriving at Concord, 22 August, she underwent availability and then commenced participation in fleet and local exercises along the California coast. On 20 February 1968 she departed for her second tour of duty off Vietnam, returning 14 October, for leave and upkeep, after which she will, into 1969, continue servicing the 1st Fleet until setting out for the western Pacific and another tour with the 7th Fleet.


Add Your Name to the
AE-22 Crew Roster