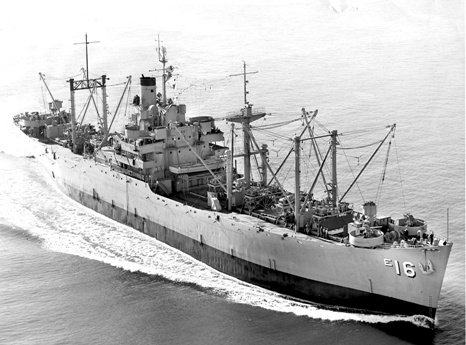 After shakedown and fitting out, AE‑16 reported to Commander Service Force Atlantic Fleet 8 September 1945. She was then ordered to proceed to Hawaii via the Panama Canal. The ammunition ship was assigned to the western Pacific from there, arriving Leyte in mid‑October 1945.

Mount Katmai was involved in normal support operation off the Pacific coast when the Korean war began. On 22 July 1950 she deployed from San Francisco to WestPac, arriving in the combat zone 18 August. She rearmed and replenished combatant ships of TFs 77 and 95 in the Yellow Sea and the Sea of Japan. Returning home in November 1951, she departed again for the Korean war theater in April 1952, again supporting units of TFs 77 and 95. Back in the United States in February 1953, she sailed again for the Far East May 1953. During this deployment, she rearmed approximately 50 ships before the war ended.

Following the armistice, AE‑16 returned to CONUS for overhaul at Mare Island Naval Shipyard. She got underway for the Far East in May 1954 for a 6‑month tour, the first of nine WestPac deployments in the following decade, in which she alternated service on the west coast with operations in the Orient helping to preserve peace and deter Communist aggression.

In December 1964 Mount Katmai commenced an extensive overhaul period, including installation of increased communications capabilities and a helicopter deck for vertical replenishment.

On 26 February 1965, the ship departed San Francisco 20 April, underway to a new war zone to replenish 7th Fleet ships. She arrived Subic Bay 15 May via Pearl Harbor. Within a few days, she was underway for rearming operations in the South China Sea, servicing the carrier strike groups and combatant ships off Vietnam. Operating out of Subic, Mount Katmai provided logistical support to the operating forces until late November. She departed Hong Kong 1 December 1965, arriving San Francisco 16 December.

Entering Hunter's Point Naval Shipyard 17 January 1966 for overhaul, the ship returned to an operational status with Service Force Pacific Fleet 21 March. She participated in type and 1st Fleet training operations until 1 June when she deployed to WestPac. After a short visit in Hawaii, she arrived in her WesPac home port of Subic Bay 25 June.

5 July she was underway for Yankee Station, for rearming carriers and their escorts. In addition to providing aircraft ordnance for airstrikes against North Vietnam, the ship also provided ammunition for ships engaged in support and interdiction shore fire missions along the entire Vietnamese coast.

Leaving San Francisco 7 August 1967, she arrived at Subic Bay 30 August via Pearl Harbor. Rearming operations were conducted in the South China Sea and off the coast of Vietnam with carriers and fire support ships.

Mount Katmai continues to provide ammunition to U.S. and Allied combatants off the coast of Vietnam into 1969.


Add Your Name to the
AE-16 Crew Roster