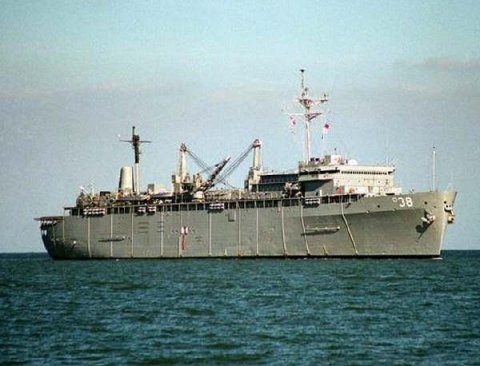 She was named for a sound of the Pacific Ocean reaching into the state of Washington 80 miles. The Bremterton Washington Navy Base is at the southern end of the Puget sound.

After sea trials, USS Puget Sound transited the Panama Canal and then spent her entire srevice career with the Atlantic Fleet. At various times she was homeported in Newport, Rhode Island; Gaeta, Italy; and Norfolk, Virginia. Stateside duty was varied with Med and Caribbean deployments. While in Gaeta, Italy, she was the Flag Ship of Sixth Fleet. In the latter potion of her service career she supported Operation Desert Storm and Operation Desert Shield.

USS Puget Sound (AD-38) was decommisoned on 27 January 1996. Her hulk was sold to ESCO Marine of Brownsville, TX. ESCO completed her scrapping in March of 2009.

After outfitting and builders trials at Puget Sound, the new tender steamed 17 August on the first leg of her voyage to join the Atlantic Fleet. She called at San Francisco and Acapulco before shakedown at Guantanamo Bay, Cuba 6 September through 4 October.

Calls at the Virgin Islands and Mayport, Fla. 6-13 October were followed by final acceptance trials. Puget Sound arrived Newport, R.I., her homeport, 16 October. After post-shakedown availability at Boston Naval Shipyard 15 November-13 December, the tender returned to Newport to commence her tending duties in earnest and to serve as Flagship for Commander, Cruiser-Destroyer Force, Atlantic. She serves the Fleet at Newport into 1970.


Add Your Name to the
AD-38 Crew Roster