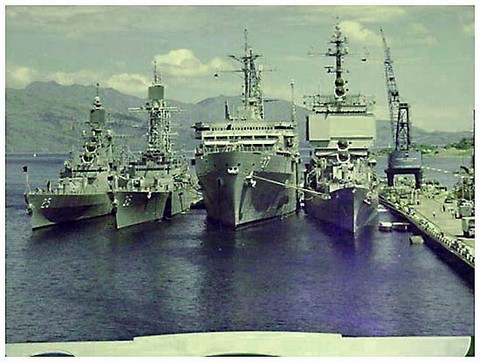 After her commissioning, Samuel Gompers spent the next several months in initial outfitting, with acceptance trials taking place from 28 August to 1 September. On 3 October, she got underway for her designated home port, San Diego.

The next month, the destroyer tender underwent various inspections as she was to be deployed to the western Pacific without the benefit of a prior shakedown cruise. This necessitated that a high degree of readiness be attained in a short period of time. All inspections showed that the ship was ready for sea, and she departed San Diego on 10 November for Pearl Harbor.

Following a weapons transfer there, from Prairie (AD-15), Samuel Gompers stood out of Pearl Harbor on 20 November bound for Yokosuka. Upon arriving there on 30 November 1967, she began providing fleet repair support to the operating forces of the Pacific Fleet. In the first month of availability, her repair department accomplished job orders for 54 different ships and other activities.

Samuel Gompers departed Yokosuka for Sasebo on 13 January 1968. Her in port period there was originally scheduled on the 25th. However, the capture of Pueblo (AGER-2) by North Korea brought increased activity by the Pacific Fleet in the Sea of Japan. The destroyer tender's services were required to maintain the destroyer screen for the five aircraft carriers then alternating port visits to Sasebo. Seventy-one ships were serviced there before the AD departed.

On 18 March, Samuel Gompers sailed to Kaohsiung, Taiwan, for three weeks. She anchored in mid-stream and serviced 17 ships before departing for Hong Kong, B.C.C.; Subic Bay, Republic of the Philippines; and San Diego. Her first deployment ended on 8 May when she arrived at her home port. One month later, she moved to Bremerton for a period of yard availability. She embarked over 200 dependents to make the voyage up the west coast.

On 27 July, Samuel Gompers stood out of Bremerton, with the dependents aboard, and returned to San Diego. From 30 July to 15 November, she serviced ships there. On the 15th, the tender departed San Diego, with Task Unit (TU) 15.8.2, bound for Subic Bay, via Pearl Harbor, and her second WestPac deployment. From 8 December 1968 to 13 May 1969, she performed fleet repair services in Subic Bay. The period was broken by one five-day visit to Hong Kong. On 13 May, the AD sailed to Yokosuka for a short period of rest and recreation, from whence she sailed to the west coast, arriving on 4 June.

Samuel Gompers operated in the San Diego area until 13 March 1970 when she again deployed to the western Pacific. Subic Bay was her base of operations for servicing fleet units until returning to San Diego on 13 September 1970. She remained there until 2 November 1971 when she steamed west on another deployment. After making port calls at Pearl Harbor and Yokosuka, she moored at Subic Bay on 24 November. The tender operated out of that port until 12 July 1972 when she sailed for Pearl Harbor and San Diego. During the seven-month deployment period, Samuel Gompers made two trips to Danang, South Vietnam, from 9 to 16 April; and from 22 to 30 April. When she reached her home port on 31 July, she remained there to provide repair services to fleet units until mid-July 1973. At this time, she moved up the coast to Portland, Oreg., and operated there until returning to San Diego in early December.

In January 1974, Samuel Gompers departed her home port for another tour in the western Pacific and, into June 1974, still serves with the Pacific Fleet.


Add Your Name to the
AD-37 Crew Roster