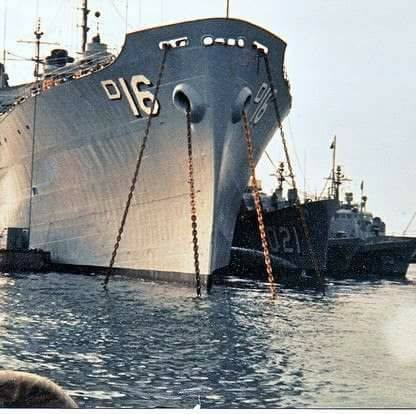 The USS CASCADE (AD-16), a Civilian Conversion to a Destroyer Tender, was commissioned on 12 MAR 1943. USS CASCADE served her country for 31 years, 8 months and 10 days, until decommissioned on 22 NOV 1974. Commissioned in the midst of WW II, CASCADE headed west to tended to the war effort against the Japanese. Moving towards Japan in steps, CASCADE finished the war on occupation duty and returned to the US in March 1946. She was decommissioned in 1947 and placed in reserve. CASCADE was recommissioned in 1951 and through 1974 tended the East Coast based destroyer squadrons. She routinely deployed to the Mediterranean and was homeported in Naples, Italy from March 1971 to October 1974. Upon her return to the US, she was decommissioned in November 1974 and then scrapped in 1975-76.

Cascade cleared San Francisco 12 June 1943 for Pearl Harbor, where she began her war time duty of tending destroyers. As the war moved westward, Cascade followed, to bring her support close to the action areas. From November 1943, she was stationed successively at Kwajalein, Eniwetok, and Ulithi, while the ships she served ranged the Pacific, escorting convoys, screening carrier task forces, supporting invasions, and carrying out many other tasks with typical destroyer versatility.

In June 1945, Cascade sailed to Okinawa, where she endured the suicide raids and typhoon weather along with the combatants through September. She served in Wakayama Wan, and at Tokyo, Japan supporting the occupation until March 1946, when she sailed for the east coast. Cascade was decommissioned and placed in service in reserve at Philadelphia 12 February 1947.

Recommissioned 5 April 1951, Cascade was based on Newport, R.I., as tender for the many destroyers home-ported there. From this port she has cruised to the Caribbean and the Mediterranean for training and to support destroyers deployed in those areas. On these cruises Cascade has carried the flags of Commander, Service Force, 6th Fleet, and Comander, Destroyer Flotilla 6; she has also served as flagship for Commander, Destroyer Force, Atlantic, on occasion. The tender has carried out these duties through 1963.


Add Your Name to the
AD-16 Crew Roster